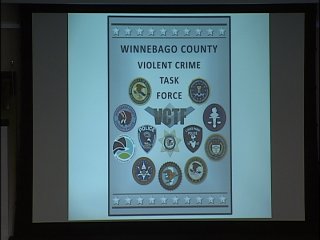 Crime numbers trend down as the Winnebago County Violent Crime Task Force holds a meeting to share the research. Police leaders took a year-to-year look to see where the area stands now.
We’re having some early success with our violent crime reduction, we just need to sustain it.

22% is how much the task force says violent crime has dropped since this time last year. At the Rockford Housing Authority, it’s a number that translates into less shots fired calls. And with the thought of summer crime nearing, RHA leaders are being proactive.

“Going door to door where we understand there may be issues,” said Ron Clewer. “It’s certainly a move in the right direction.”

“Any development where we have folks still living and shots are still occurring, one shot is too many.”

Chief Epperson acknowledges there’s work to be done in another specific aspect, tracking re-offending parolees. Conversations with the Department of Corrections raise the topic of electronic monitoring.

He hopes collaboration leads to even lower crime numbers than the task force reports.

“So I think there’s a smarter way to do policing so we just have to surgically drill down to see what the best thing we can do to sustain our momentum that we have going.”

The task force is made up of local, state and federal law enforcement agencies. It was formed around a year ago.

A MORE EQUAL AND EQUITABLE COMMUNITY

OUR “HOMETOWN HEROES” WHO ARE THE FRONTLINE WORKERS